Tegan and I are continuing our post-kids tradition of getting to one big concert per year. Last year it was B.B. King. The year before was Emiliana Torrini. This year it was The Dresden Dolls, and what a year that makes it.

The Dresden Dolls are an amazing band that largely defy categorisation. Some friends have asked us, “we know they’re alternative, but what sort of music is it?” We don’t know how to answer – they are unlike any other band we know.

We’ve been fans back since 2004 but have never seen them before. Back in 2004 we were about to move house when they came to Australia (and they didn’t come to Canberra) so we missed them and had just never managed to see them since. The one time the lead singer, Amanda Palmer, came to Canberra was about a week before Isaac was born and as such we had other things occupying us at the time. This time around, which was a reunion tour for the Dresden Dolls, we knew we had to go. We almost didn’t make it though – they weren’t playing in Canberra, so we had to go to Sydney or Melbourne. The Melbourne gig coincided with a planned trip to visit family in Melbourne anyway, so that worked out. However, Isaac has been having so much trouble getting to sleep – often crying or screaming for several hours of an evening when we try to settle him – that we really didn’t feel that in good conscience we could leave him with family for an evening while we jaunted off to a concert. At the end of the day we overcame that aversion, went anyway and were extremely glad that we did.

We arrived at the theatre shortly after doors were due to open. The queue went past the theatre, around a corner, up the lane, around the next corner and another 10-20m down that street. And the outfits in the crowd were something to behold – people certainly dressed up for the occasion – quite a few painted faces in the Dresden Dolls’ style.

But the show:
Firstly, Tegan had the fortune of catching Amanda Palmer’s ‘ninja gig’ in the ladies bathroom, were she sang the Ukulele Song, about how the ukulele can make the world a better place. Tegan said that it was fantastic – she was just in there washing her hands and Amanda walked in right by her for the ninja gig.

The Dresden Dolls came on stage to introduce each of the support acts or, in the words of the billing, ‘Special guests’. And they really did seem like special guests – both Melbourne bands, but both obviously knew Amanda Palmer well beforehand – one band talked about writing a song in her apartment in the US. The first, the Jane Austen Argument, were good but – for me – nothing special. Tegan enjoyed them more.

The second, the Bedroom Philosopher, was fantastic. Mostly he was hilarious – I’d pay to see him again on his own – I’ll have to keep an eye out to see if ever comes to a comedy event or the like in Canberra. Amanda Palmer appeared on stage with both bands too, which was a very cool touch. This is a video that someone else took of him playing while Amanda came on stage with him.

But to the main attraction – the Dresden Dolls.

They have so much energy and are such good performers. 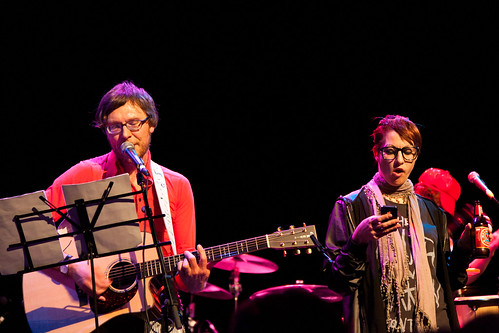 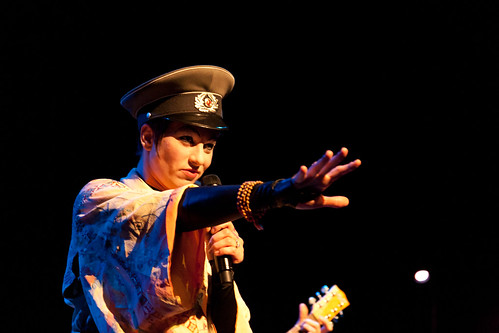 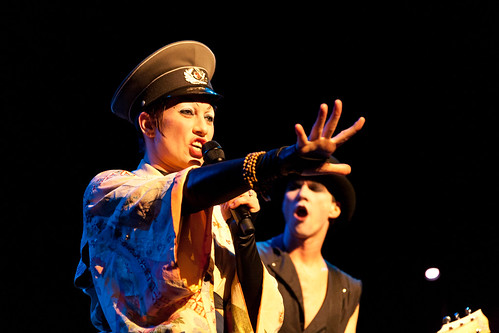 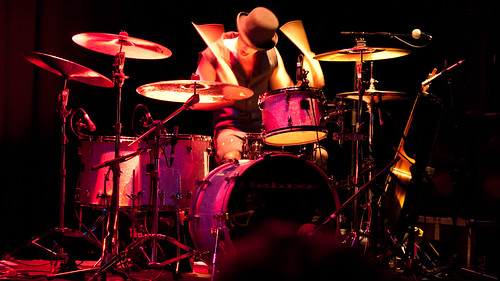 Brian on the drums 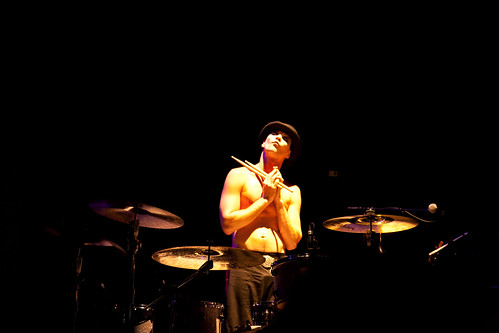 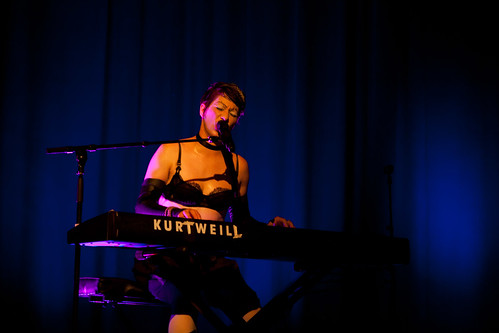 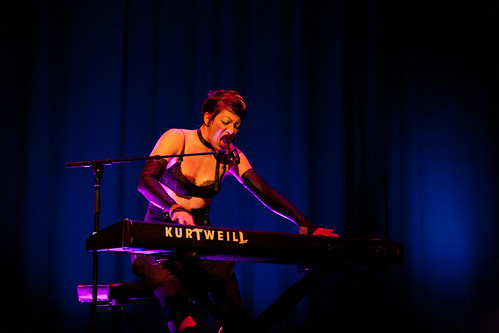 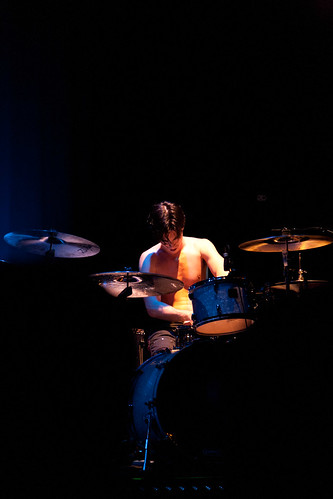 A quieter moment on the drums 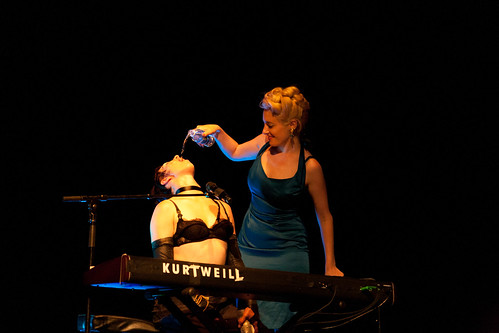 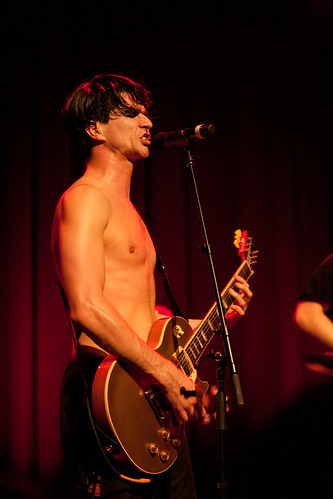 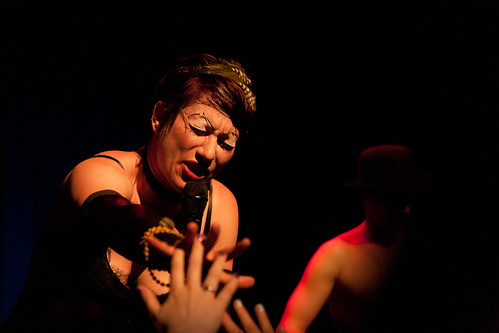 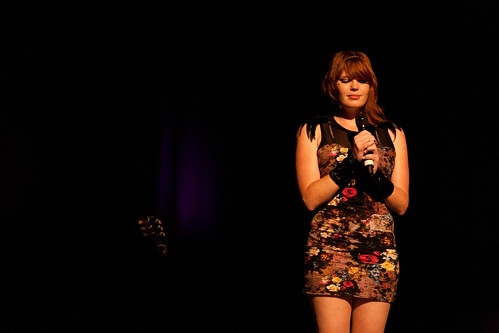 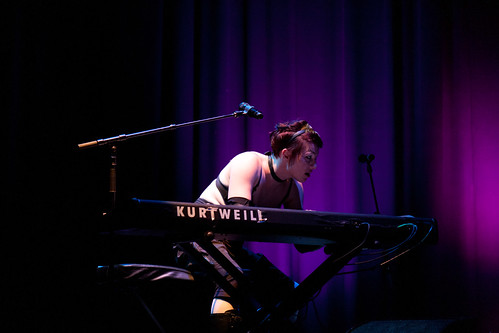 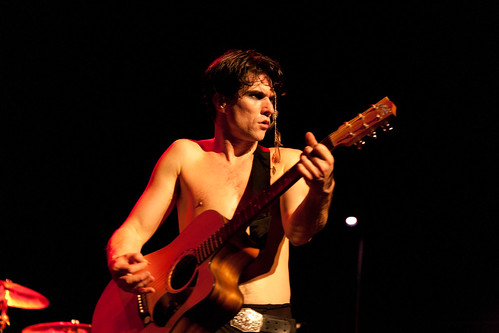 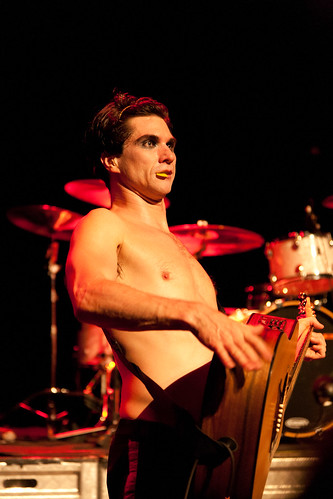 They take one side of the stage each – Amanda with her keyboard on the left and Brian on the drums on the right. But the interplay between them is fantastic too. There were a few moments where Brian would do something ridiculous in the middle of a song to make Amanda laugh, which actually added a really cool touch to the gig. It’s obvious they were having fun too and it wasn’t just a stale and boring touring experience.

In one way the whole thing was a highlight – such a buzz of a night – but some of the more fantastic moments included:

While this might capture some of the great moments, none of it captures the pure energy and entertainment that they demonstrated. They were such amazing performers – Amanda has so much energy and great rapport with the crowd and Brian really hammed it up all the way through. They are not just a band – they are an act. Some of their energy and the act is captured in the photos I took (we were fortunate to have a good spot near the front and I took my big DSLR with me) but even they don’t really capture it. I really want to see them again.

I’ve been quite enjoying this playlist that I put together in iTunes recently:

The last two tracks don’t fit quite as well and should probably be rethought, but overall it’s a good, fun 75 odd minutes of music.