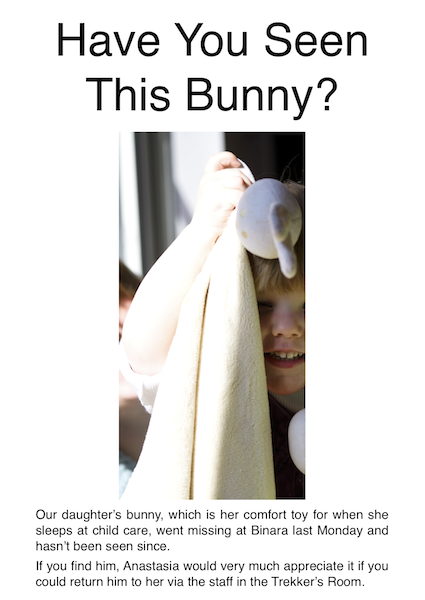 ‘Snugglebunny’ is one of Anastasia’s favourite toys. He was a gift to her from friends of ours, Ally and Nathanael, when they visited us in hospital in the week she was born. Since Anastasia went to child care, he has been the toy that she slept with and used for comfort. When she switched child care centres in around April 2010 he took on added importance as the toy that gave her additional comfort when she was in a new surrounding. He also started coming home each night, whereas previously he had just been kept in the child care centre.

Just after Isaac was born, I accidentally left Snugglebunny at child care one Monday night after picking Anastasia up. When we discovered at bedtime that he wasn’t there, Anastasia was devastated. She wanted us to go back to childcare right then to pick him up, to which we had to explain that all the leaders had gone home too and that we couldn’t get in. It took her about an hour to calm down and settle after this discovery and only after we promised to go in first thing the next morning to pick him up, which of course we did. Anastasia proudly proclaimed, “I’m happy with Snugglebunny back.”

A couple of weeks after that, Snugglebunny once again was left at childcare. This time, however, he was just nowhere to be found when we went to leave. Anastasia and I and the leaders in her room looked everywhere for him but to no avail. I expected Anastasia to be devastated once again but she actually took it in her stride, explaining to Tegan when we got home that she lost Sungglebunny at child care. We called a few time during the week and he still hadn’t been found, nor was he there when Anastasia went back to child care on Friday. Despite taking it quite well, Anastasia was a bit disappointed when she thought about her missing Snugglebunny and a few times on the weekend said, “I want Snugglebunny back.”

We made this poster to put up at child care on the Monday to see if we could enlist additional support in finding Snugglebunny, but it was never actually needed as, lo and behold, when we arrived on the Monday morning Snugglebunny had been found and the leaders proudly presented him to Anastasia as soon as she walked into the room. She was ecstatic and didn’t put him down again for some time. Along with her Kaloo bears and a very old baby doll, he remains her favourite toy and still goes to childcare with her every time, although we are much more careful now to make sure he always comes home again too.