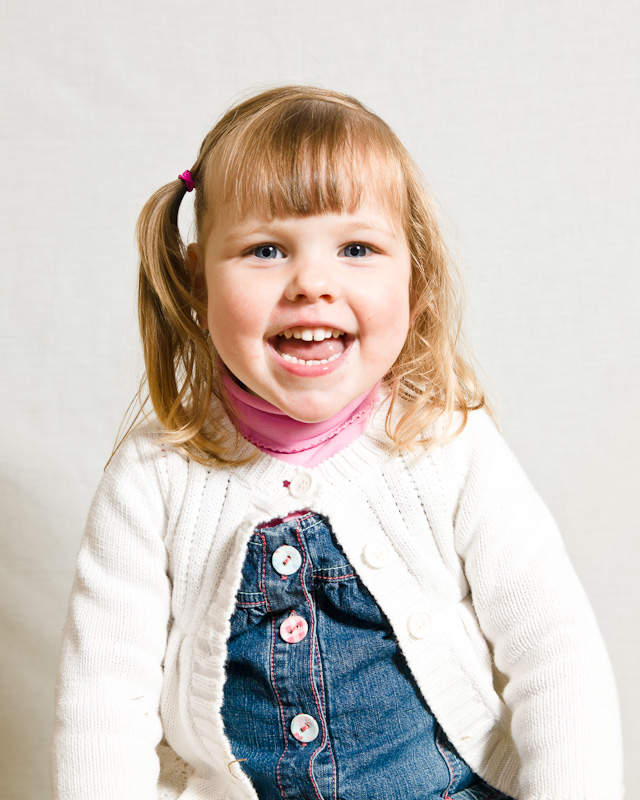 Anastasia at two and three quarters

We are enjoying watching Anastasia grow and develop into a little girl.  We love seeing her personality emerge and her understanding of the world expand more and more.  She brings us so much joy!

A few of her favourite things…

Anastasia is a gregarious little soul who loves her people!  Anastasia loves going to creche at church on Sunday and during ladies Bible study, often asking to go during the week. The carers at childcare have told us that Anastasia is a happy, confident little girl who is very affectionate. She does seem to enjoy her time there, particularly ‘Music with Miss Jess’ on Mondays, and is invariably in a wonderful mood when we pick her up. She has formed consistent friendships with several of her classmates at childcare but she remains most closely attached to her family.  Anastasia loves seeing, playing with, talking to and praying for her family.  When looking at the family portraits taken over the years, Anastasia will excitedly announce, “That’s my family!”

These have been a constant favourite since she was about 10 months old.  Where other toys have featured as favourites for a while and then been returned to the toy box, Anastasia has retained her delight in baby dolls.  She plays with them at home, at crèche and at childcare.  Isaac’s arrival has prompted an even greater range of activities, with baby dolls being tucked into bed, rocked to sleep and patted to calm their crying.

After going through a phase of picking up sticks and rocks everywhere we went, Anastasia wholeheartedly transferred her affections to acorns.  The lovely oak trees across the road have provided a ready supply but familiarity in this instance has not bred contempt!  We find collections of acorns in the base of the pram, in Anastasia’s handbags, her pockets and jewellery box, in her toy sink and under the couch in her room.  We must have thrown out kilos of them!  Thank goodness the season won’t last for too much longer… 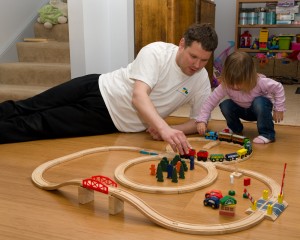 Tim was diligent in expanding Anastasia’s toy train collection in the months leading up to Isaac’s arrival and she now has quite an impressive collection.  Tim and Anastasia have spent a wonderful time creating an amazing variety of track designs and sending the trains around them – I’m not sure which of them has more fun!

This has always been a favourite with her, only now she is much more vocal about what she’d like to listen to.  In the car we often hear comments on the music being played from the rear seat: “What’s this music called?”, “I don’t like this music.”, “I like this music – this song is cool!”.  The Peter, Paul and Mary we used to play for Anastasia has largely faded in popularity, although she is still intrigued by identifying songs that we played for her “when I was a baby”. Dora the Explorer songs are always popular, but the surprising favourite is Bjork’s ‘It’s oh so quiet’.  ‘Lah-Lah’s Big Live Band’ has been a recent and very popular addition to her collection and we have very much enjoyed dancing along in the living room with percussion instruments in hand! Yo-Yo Ma still provides the soundtrack for each evening’s descent into sleep with Bach’s Cello Suites; Anastasia described this to us the other day as ‘quiet’ music.

Anastasia has always loved books and her love of them has only increased.  She loves looking at books and being read to and has recently begun pretending to read herself.  She delights in ‘reading’ to us by reciting one of her favourite books – “The Big Night-night Book” by Georgie Birkett – from memory.  Lately she has started ‘reading’ to Isaac, sitting next to his bouncer and telling familiar stories from her own books. She is starting to recognise numbers and letters and often gets frustrated when she cannot read for herself.

Anastasia has a very active imagination, keeping us entertained with her flights of fancy and role-playing.  Everyday activities feature heavily – making coffee, cooking, going to the shops.  She also loves the idea of going to school: she will dress up and put on hat and backpack and asks you to play along.  Grandma Johnson once indulged her by actually walking with her to North Ainslie Primary School, which delighted Anastasia!

We have been surprised at the directions that Anastasia’s imagination has taken her.  A few months ago, Anastasia seemed preoccupied with her apparent sensitivity to tomatoes.  We have often told her that she should not eat tomatoes as they make her feel sick.  For some time she engaged in imaginative play about her various toys being ill and Anastasia feeding them tomatoes to make them feel better. 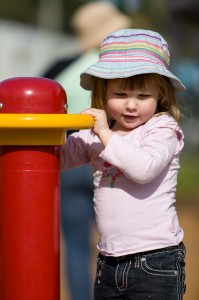 Anastasia is continuing to develop her own personality and will.  This is sometimes frustrating for her parents and entirely expected for her age!  Anastasia has become more and more definite about her opinions on various topics and is keen to make decisions on her own.

With such definite ideas about how things are (or should be), conversations with her can be entertaining at times:

Anastasia: What are you doing, Mummy?
Tegan: I’m looking at my beautiful baby girl.
Anastasia: I’m not a baby anymore, Mummy, I’m a little girl.  And I’m getting bigger and bigger every day.

She has also startled us by her early attempts at lying, mostly around whether she needs a nappy change! A couple of months ago she took us aback us by her first attempts at manipulation:

I’m afraid that my initial response was to laugh!!  Sometimes it is really hard not to laugh, even though I know it isn’t helpful for guiding her longer term behaviour.  She has a beautiful smile and readily flashes it when attempting to get her own way! Anastasia has also become an expert on extending her bedtime, with an impressive repertoire of delaying tactics.

For those who are interested, here is a sample conversation between Tim and Anastasia last week, along with a transcribed version for those not used to listening to her every day.

As the conversation indicates, Anastasia has a current preoccupation with growing up and has developed a long list of things she would like to do when she ‘gets bigger’. A few times recently, when we have remarked that she has grown, Anastasia has then asked, “So can I drive the car yet?” Isaac has been a joy to have but his crying has been difficult on the whole family.  Anastasia has been coping remarkably well under the circumstances.  Despite the inevitable irritation with him on bad days, she shows a remarkable amount of compassion and care for him – “Poor Isaac. Is he settled now, Mummy?”  She also appears to have accepted his presence in our family, often asking to see him when they have been separated and wanting to kiss him good night each evening.

We have been delighted to watch Anastasia taking on her role as a ‘great big sister’.  It is something she takes seriously and she can’t wait to teach Isaac lots of things.  When Isaac was only a few weeks old, I came downstairs to see Anastasia gently clasping Isaac’s hand around a little bouncing ball.  “I’m teaching him to throw a ball, Mummy!  He has to use a little ball because he’s only little.”  Each time we remark that Isaac has grown, she eagerly asked whether he can do new things such as sit up or walk. We are so looking forward to seeing them grow up together!

All in all, we are delighted to watch Anastasia grow and develop and look forward to the changes that the months and years will bring.