A whole week of my stay in Hong Kong has gone by undocumented on our blog, so I thought I’d catch up on what Greg, Ruth and I have been up to over the last few days. 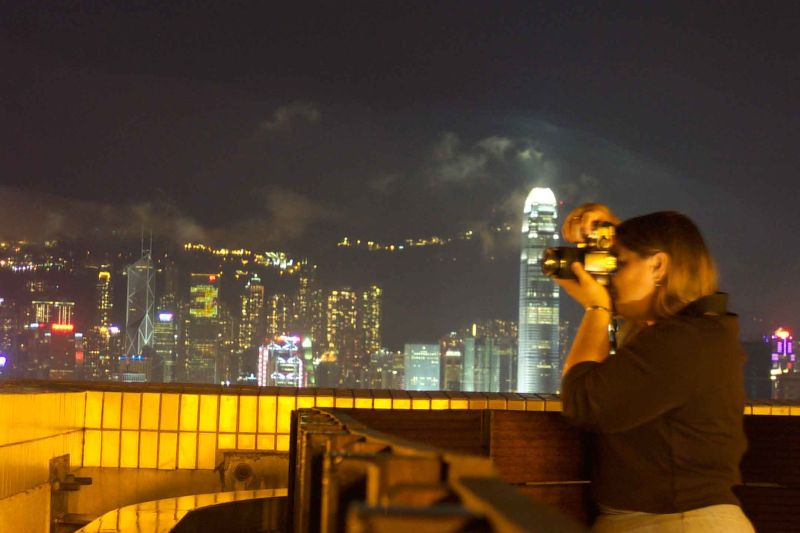 Easter Monday was also a public holiday here in Hong Kong, so Greg was able to stay home for an extra day with Ruth and I. The main event for the day was a lunch which we were regarding with some trepidation – a visit by the secretary at KWWC Li Ping Memorial Primary School, Winki, and her daughter Water. Winki invited herself and her daughter to lunch just before I arrived, presumably for a free English lesson.

We really weren’t sure what to expect, so we planned a simple lunch of hamburgers that we could all make together. Greg and I walked down to the ‘ParknShop’ – the local equivalent of Woolworth’s – to get supplies. This was an experience in itself; many things are the same, however the meat is unpackaged and uncovered so that people can help themselves. Not the most hygenic of arrangements, I would have thought! Greg and Ruth tend to only buy meat which is kept behind glass, much like in a deli. Ironically enough, much of this comes from Australia!

We had an awkward half an hour when Winki and Water arrived; we were not really sure of their expectations for the day. We had a brief inspection of the apartment and then settled down to making lunch. Luckily making hamburgers is a messy and time consuming exercise! Winki’s English is relatively good, and she is able to converse without too much difficulty. Her daughter Water, however, is a strange child. Despite being eleven years old, she had to be coaxed to say even the simplest phrase and preferred to make random noises or imitate a cat rather than converse. This made communication rather awkward, as her mother was constantly trying to encourage her to speak.

Greg and Ruth’s wedding photos provided a welcome distraction after lunch, and we finished up the visit by taking a trip up to the roof of the building to see the impressive view. By contrast, Ruth had a lovely time late that afternoon in her weekly tutoring session with 13 year old Cherry. They had a lovely conversation ranging from an explanation of sunburn (a concept foreign to most people in Hong Kong) to a discussion of singing techniques in choir. Ruth very much enjoys her conversations with this intelligent young girl, which in past weeks has even covered the political situation in Taiwan.

Tuesday began very quietly, but with some anticipation. On the previous Friday Greg and Ruth had kindly helped me to bargain an exceptional price for Tim’s new camera – a digital SLR Canon 300D. We were told that we couldn’t pick this up until after the long weekend and instructed to call on the Tuesday. When I did so, I got the run-around: they didn’t have one in stock, the price was going to change because of the rising Japanese yen, etcetera. There went that idea. Ruth and I went out as planned and arranged for my visa to China, for our anticipated trip to Shenzhen, and left the area without a camera.

Ruth took me to Festival Walk, an enourmous shopping mall covering five floors. We had a typical taitai day – a taitai is a western woman whose husband works in Hong Kong but she does not. We had morning tea that lasted for about an hour and a half, then wandered around the mall window-shopping. The mall is populated with dozens of designer and brand name shops, with price tags that are roughly equivalent to my spening budget for the entire trip! I was astonished to see the full size iceskating rink on the fourth floor, complete with classes of children taking lessons. Standing by the rink was quite entertaining, not to mention nice and cool.

Greg joined us for another shopping expedition that night, trooping from shop to shop to find a good deal. We ended up going to a much more reputable dealer, paying about $2000 HK more, but coming home with a legitimate product with all the bits and peices we wanted. On arriving home, we immediately charged up the camera and after dinner took it up to the roof to photograph the impressively-lit Hong Kong skyline.

A clear day on Wednesday prompted a trip to Stanley on the south side of the island for Ruth and I. I used Tim’s camera to good effect on trip ferry trip across Victoria Harbour and on the bus on the way there, trying to capture the dramatic scenery. The land is less built up, and there were incredible views of the many islands dotting the South China Sea. The relative lack of smog and cloud afforded a lovely view from the top of the double-decker bus as it traversed the narrow, winding roads to Stanley.

Ruth and I spent a lovely time wandering around Stanley markets and buying bits and peices here and there. We wandered down to the water and I was charmed to see a couple of junks moored in the shallow water – a sharp contrast to the palatial residences clinging to the sides of the overlooking mountains. We had lunch on a restaurant strip that seems to cater almost exclusively to the western ex-pat population. Nevertheless, I ordered some delicious dim-sum: it was probably the most western dim sum in all of Hong Kong! It started raining during our lunch, politely held off for the rest of our wander through the markets, then began again as we hopped on the bus for our return journey.

Thursday Ruth and I spent a very quiet day – her feet we very swollen and we decided to rest. We spent the day talking, reading and watching DVDs. The airconditioning in the apartment made it much cooler and more pleasant than the smoggy humidity outside. When Greg arrived home from school he walked me down to the visa office to collect my passport and visa. I took a number of photos with the new camera, particularly on the way back. My shop owners do not like having photos taken of their premises, so I am getting skilled at standing off to one side, quickly focusing, shooting, and walking rapidly away. On the way home, a took Greg up on a dare to eat some squid on a stick from one of the street vendors. It actually tasted fine, despite the bright orange colour, and I suffered no ill effects afterwards. 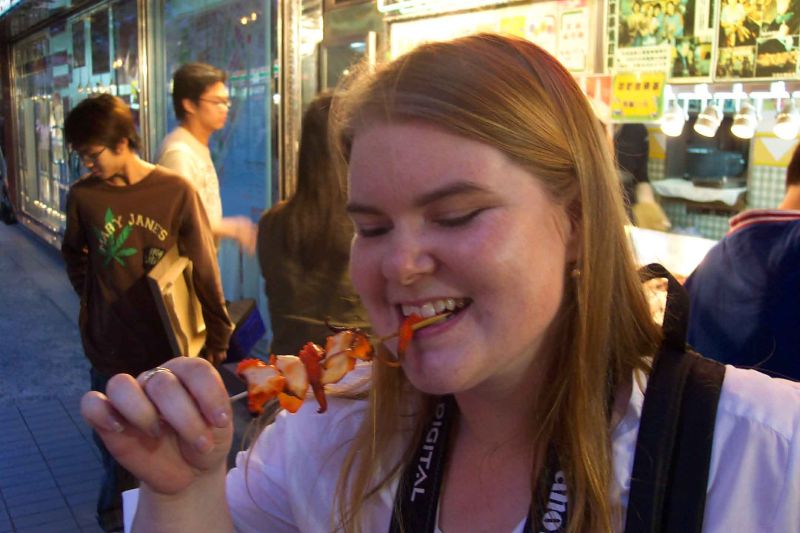 Ruth and I cought the bus to Li Ping Primary School on Friday to drop off a form, as Greg was teaching at his other school. I was quite keen to see the layout of the school. It is, as you might imagine, extremely compact! There is very little spare room anywhere, and I am sure the corridor areas would not comply with current Australian building codes! Greg’s desk is extremely small – about half the size of the one he has at home – and crowded into a very small staff room with other identical desks. Our next foray took us to the local library to stock up on books, which took us past the wet markets. The smell and crowds were enough to convince me not to go in, but I took a number of photos from outside.

In the afternoon we went off to Sham Shui Po, a much more locally-focused area with second hand markets and an astonishing array of haberdashery shops! There were the elastic and cord shops, the jersey fabric shops, the zipper and fastener shops, the lace and cord shops, the jewellery-making shops and the differnt types of bead shops. These contained a mind-boggling array of beads – from enourmous plastic beads to tiny ones, and a huge range of ceramic, wood and metal beads. I bought a lovely array of unusual beads for my mother, and could easily have spent hundreds of dollars more had the budget allowed for it!

Saturday is a whole new blog… See you soon!