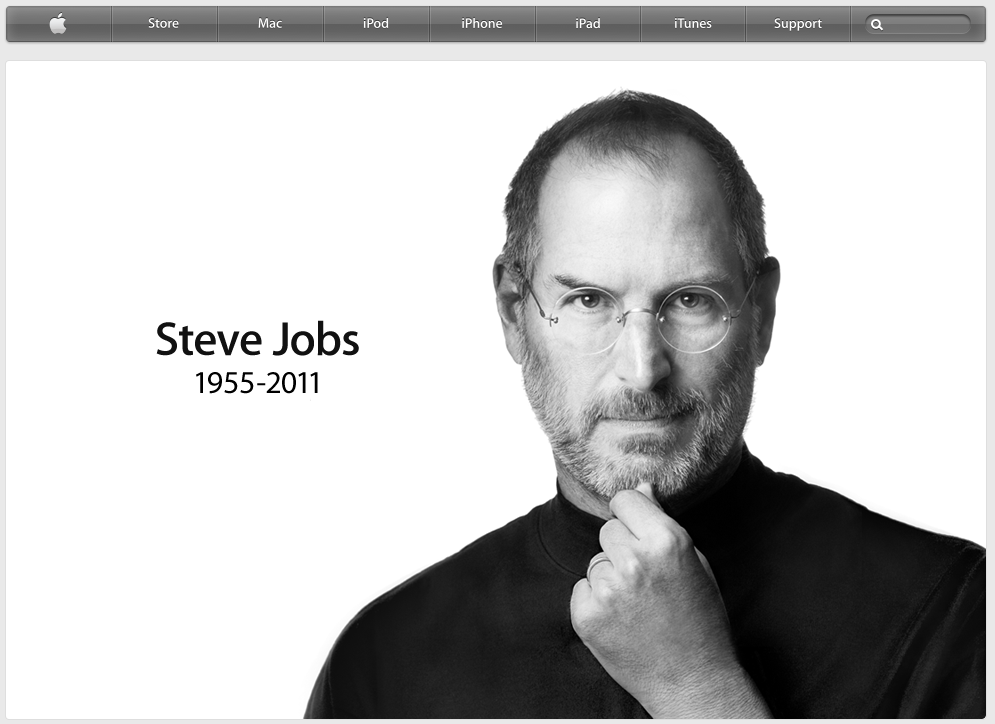 I got back to my desk at about midday on Thursday after a meeting, looked at the news online and saw that Steve Jobs had died. It made me sad. 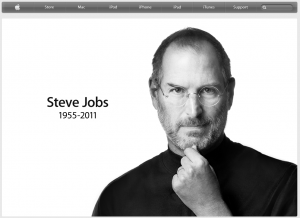 But I’m still not really sure why I’m sad, and why I’m even still a bit sad now a couple of days later.

Yes, I’m a fan of Apple’s products and have been ever since I bought my first iPod back in, I think, 2003 (although I might have been on my way to becoming a fan when I bought Tegan an iBook (which in those days was a laptop – not an ebook) in December 2002). But at the end of the day they’re just tools and gadgets that enable the things I want to do or make them easier. I don’t think I have a particular emotional attachment to my Apple gadgets. When an iPod or laptop has died (usually after extensive service) I’ve been disappointed because it meant I needed to spend money to buy a new one, but that was it. And my fondness for Apple gadgets isn’t intrinsically linked to the CEO and founder of the company that made them. In fact, I was never very impressed with what I heard about Steve Jobs as a person – based on the old stories about how he had for years denied the paternity of his first daughter or how he had scammed his friend out of what should have been his rightful share of the proceeds from creating a game for Atari. Basically, I had the impression that he wasn’t a particularly nice person.

The sense of sadness and loss I feel confuses me. One could put it down to the old John Donne line – ‘any man’s death diminishes me because I am involved in mankind’, but I don’t think that’s it either – plenty of people die about whom I don’t feel sad. Maybe I’m just tired and feeling a bit fragile – and there is some truth to that, although it doesn’t explain the full thing either. I think what it is, for good or ill, is that I’ve developed a significant respect for Steve Jobs over the last few years and that the sense of loss is because I’ve spent a lot of time thinking about his views and actions. There is an attachment for me because he is someone I have engaged with, albeit vicariously.

At one level, this is because of my attachment to Apple’s products. I have started typing this on an iPad, which is connected to the Internet via a personal hotspot on my iPhone, and I will include an image I edited and stored on my iMac. Later today I will watch a video that will be streamed from my iMac and displayed on my tv via an AppleTV. I will do more work typing this up using Tegan’s Macbook Pro while sitting on my couch watching the Rugby World Cup. The more I have read about Apple, the clearer it has become that the connectedness of all these gadgets – the way they work together almost effortlessly and the way they enable me to do all these things – the beauty of their design in both looks and usability – it was Steve Jobs that drove this. He was the visionary who saw the possibilities and pushed people to make them happen, not to mention structuring a business and manufacturing supply chains to put them in my hands at prices I can afford (albeit, that I can afford only because of my comfortable middle class job and lifestyle).

I’m also very interested in the reports about what Steve Jobs was like as a manager. Having worked for detail-obsessed micro-managers, it’s typically a frustrating experience, yet that was something that Steve Jobs was lauded for. Perhaps there’s message there that it’s good to micro-manage details, as long as you pick the right ones to manage and as long as you can actually contribute and make your product or whatever better by doing so. Personally, looking at the possibilities of being a senior manager in my field in the not too, too distant future there are obviously useful lessons to be learned from watching one of the stand out entrpreneurs and managers of my lifetime.

The other aspect of the sadness, I’m sure, is because I’m a Christian and Steve Jobs wasn’t. Since his death, his commencement address at Stanford University in 2005 has been quoted many times. It included the following line:

No one wants to die. Even people who want to go to heaven don’t want to die to get there. And yet death is the destination we all share. No one has ever escaped it. And that is as it should be, because Death is very likely the single best invention of Life. It is Life’s change agent. It clears out the old to make way for the new. Right now the new is you, but someday not too long from now, you will gradually become the old and be cleared away. Sorry to be so dramatic, but it is quite true.

I find this so sad – it’s close to the truth, but wrong enough to be very, very sad and disappointing. Death is not the greatest invention of life. Death is wrong. As he said, despite eagerly awaiting eternal life I don’t seek death now and I do enjoy my life. But in contrast I think that Jesus’ victory over death is the greatest thing ever and I more eagerly look forward to a day where there will be no more death and no more suffering:

And I heard a loud voice from the throne saying, “Look! God’s dwelling place is now among the people, and he will dwell with them. They will be his people, and God himself will be with them and be their God. 4 ‘He will wipe every tear from their eyes. There will be no more death’ or mourning or crying or pain, for the old order of things has passed away.” Revelation 21:2-4

But in the meantime, I appreciate Steve Jobs as visionary and I can internally mourn for someone who had such big, good and intelligent ideas and who appreciated the bigger picture, but just had it so tragically wrong.